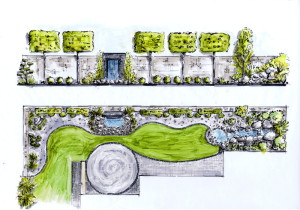 The concept is based on the notion of Zen Buddhism. This first involves the direct and intuitive experience, and for the state in which body and mind are in balance.

For this reason, the shapes and lines used in the garden are consciously coordinated and brought into balance. Therefore the circle as a symbol of Zen Buddhism for "emptiness and perfection" is being located in form of the terrace in the center of the garden.

There were two highlights set to loosen the tube-shaped garden area. First, a more natural creek, which symbolizes the "River of Life" or the "changing times", and secondly, a waterfall wall. The peculiarity of this rectangular wall is the immediate juxtaposition to the circle of the terrace. The wall in running condition symbolizes the power of water and life, and acts in the resting state as the "gateway to salvation or to the light." The idea is reinforced by the Chinese inscription "The Great Light" on the built-in black stone.

﻿
Two Buddha figures give the garden in conjunction with low grasses and dwarf pampas grass the idea of meditation.

The used light show highlights the different states of consciousness of Zen Buddhism. The waking state in the day symbolizes by the flowing waterfall and stream, while light spots in the evening generates a "dream" state between day and night by which﻿ the Chinese characters of the waterfall wall and meditating Buddhas are highlighted.﻿

Subtle colors of the plants and the black and gray tones of the terrace, the rock garden and waterfall wall emphasizes the idea of an Asian Lounge. A Japanese bonsai, espalier rectangular plane trees and a rare flower dogwood give the garden exclusivity.

Pictures of the design garden 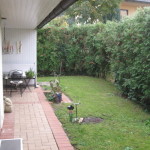 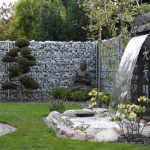 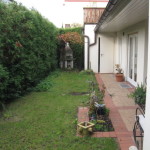 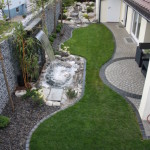 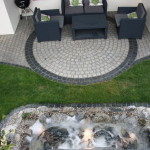 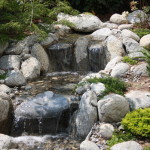 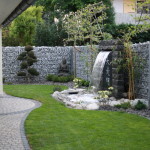 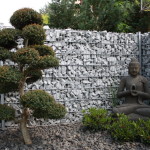 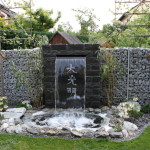 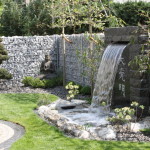 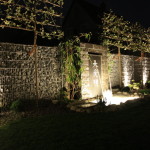 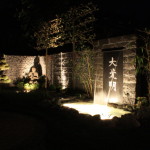 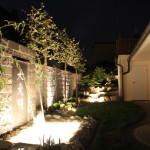 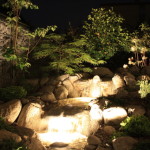 Back to the Project Gallery﻿